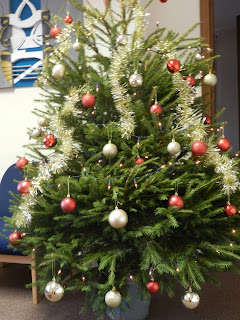 
I don’t really like Christmas trees.  In fact, I find them rather overwhelming and always duck out of decorating any which may sneak in. I always used to blame Prince Albert for bringing this tradition to the unsuspecting British public from Germany, but apparently in 1789 Queen Charlotte, wife of George III, is said to have placed a decorated tree in Windsor Castle. Once Queen Victoria had adopted the tradition, there was no stopping the Victorians from doing what they did best, and decorated trees graced their households.


The earliest record of decorated trees appearing at Christmas was in Alsace around 1520, so really it is all down to the French, and in early 1600 the tradition of bringing a fir tree indoors at Christmas and putting pretty objects on it was well-established in Germany and a little later, candles adorned the branches – a fire-hazard indeed.


If you would like something nice to nibble on whilst you decorate your tree, you could try:
spiced nuts


Get yourself some shelled nuts, say, 2 oz (that 50-60 gm) each of walnuts, almonds (blanched – that means skins off), hazelnuts, cashews, etc.


In a bowl mix 4 oz (100 gm) of caster sugar, 1 teaspoon of cinnamon, ½ teaspoon of ground ginger, a little grated nutmeg and ½ a teaspoon of coriander. You can add chilli or paprika if you would like to liven them up a little.

Separate an egg.  You can use the yolk in the ChristmasTree Biscuits or Lemon Meringue Pie as you only need the white for this recipe.


Beat the egg white until it’s thick, but not like meringue.


Dip each nut into the egg white and then the sugar and spice mix, making sure they are well-coated, and place them on the baking sheet/tray.  Don’t worry if there’s some spice mix left, you’ll need it later.


Put the tray into the oven and bake for about 15-20 minutes. Take them out of the oven and sprinkle with the remaining sugar and spice mix, then put them back in for another 5 minutes.

Allow them to cool and there you have it. Nuts to nibble at Christmas. 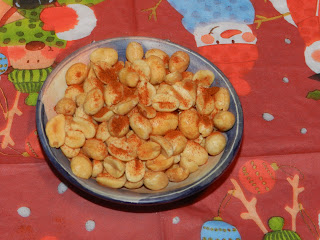