Having made the commitment and with sponsorship rolling in (we shall let you know exactly how much Jacqui did raise for The Terrence Higgins Trust at the end of the journey) the day was about to dawn on the "Do it!  - for Charity" London to Paris Cycle Ride.

Super-fit cyclist Jacqui Moore will guide us along the route.  We hope you enjoy the journey.

On the Tuesday night, 10th May 2011 I stayed in Crystal Palace at The Lodge and found that my room was on the eigth floor.  I met two fellow cyclists and we became friends over a steak and chips supper.  I didn't get much sleep that night, and I don't think anyone else did either.  A very loud, clunky lift clattered from floor to floor all night long.  Doors slammed well into the small hours, then, the alarm went off at 5.00 a.m.!  What an awful place.

Wednesday, 11th May had dawned a grey, murky morning. We ate scrambled eggs and bacon, plus Coco Pops to set us up for the first leg of the journey.  The itinerary said "the challenge begins bright and early" - not kidding.  Our briefing was at 6.00 a.m. and we had to have luggage and bikes labelled in time for a 6.45 a.m. departure.   Our journey began and we set off from Crystal Palace taking the road between Bromley and Croydon.

We rode on, following the orange arrows which guided us. 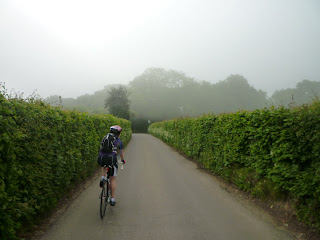 Then, we began to realise that we hadn't seen any orange arrows for a while and we knew we were lost.  ﻿
We were over the M25 and in the vicinity of Otford when I spotted it - the guiding orange arrow.  I turned to my fellow bikers and pointed to it.  Unfortunately, as I wasn't looking where I was going; I hit the kerb and 'came a cropper'.  I landed heavily and painfully on my knee - not the best start to a 300 mile journey. 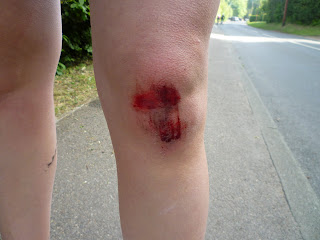 I had a torn ligament and developed effusion﻿ (fluid on the knee).  After some patching-up I carried on to the first water and snack stop at Seal.  Had a banana and struggled on through some beautiful countryside.  At Bethersden, near Ashford in Kent, we had a lunch stop which was a cold buffet.  I tried to continue as I wanted to keep moving, but my knee had siezed up and was incredibly painful. After such an awkward fall my left ankle and elbow, plus my right hip were hurting (and so was my pride).   I was feeling absolutely deflated.  Then I met Colette.
What an inspiration!  She is a wonderful Irish lady who is so cheery and up-beat she kept me going.  Every time I wanted to give up she cheered me on, talking in her wonderful Irish accented voice.  She encouraged and kept me looking to the positive.  I honestly don't think I would have made it to Dover at all if it hadn't been for her.  What an awesome lady. 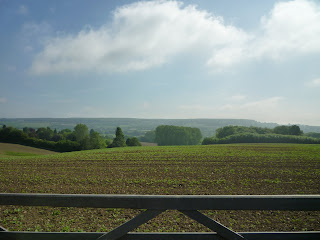 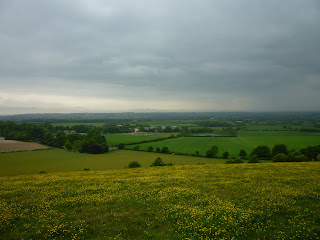 The Kent countryside is beautiful, but hilly and I had to push the bike uphill as it was far too painful to cycle. 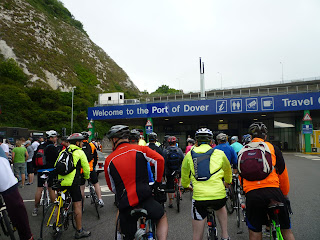 The crossing took 90 minutes.  I was exhausted - we did have fish and chips on board though, so it wasn't all bad.

On arrival in France I was unable to cyle to the Hotel Kyriad in Coquelles, about 5 miles south of Calais and was gutted that I had to finish the day in the mini-bus.

The Hotel was basic, but really comfy.  I was longing for a hot bath and a good-night's sleep.  But it just wasn't my day - the hot water ran out so my bath was, how shall I put it - tepid!

I would like to say I slept like a baby, but my body felt one-hundred, I just hope tomorrow isn't as painful as today has been.  Night night.

To ensure you don't miss any of Jacqui's journey, please complete the 'follow by e-mail' box below and you will be sent an e-mail notificaton when the next blog is published.

London to Paris – ON A BIKE – IN FOUR DAYS! Why on earth would you? 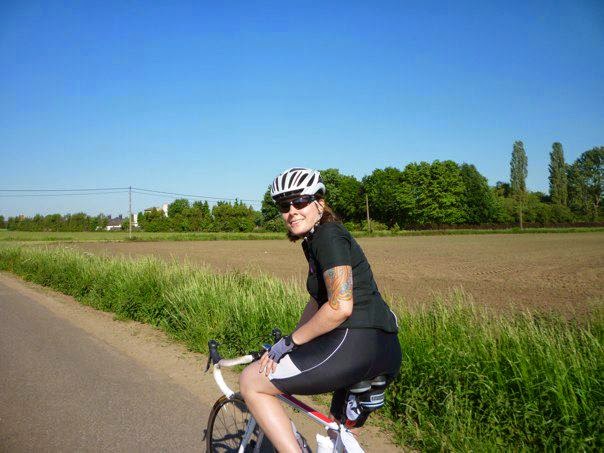 So, why would you?

Snowboarding in Milton Keynes – well they have concrete cows

so why not fake snow?

It was all going so well; Jacqui had been snowboarding for some time and was become quite adept in the skills of downhill slalom.  Well, you can only go downhill, but I’m sure you can picture the scene:  snowboarders descending the artificial snow, having a great time when suddenly it didn’t go all right for Jacqui.  The board flipped and she flew, landing in a very inelegant manner.  As she hit the ground there was a loud crack and it wasn’t the board.  Jacqui had broken her leg in two places.

She was taken to A&E and after waiting just SEVEN hours was plastered and sent home.

She spent the next six weeks on crutches – I have never seen anyone climb stairs on crutches with such speed!

After this painful experience and when the bones had knitted and Jacqui could walk without crutches she decided to put the (now mended) leg to good use.  After looking into various ways she found that a London to Paris Charity Cycle Ride was organised for May 2011.  That was it!  Plenty of time to prepare and the leg, together with the other one, could raise money for charity.

Jacqui chose The Terrence Higgins Trust as the Charity she would fund raise for through sponsorship by doing the cycle ride.

We shall follow Jacqui from London to Paris, day by day, so watch this space and please enjoy the journey and experience with her.
Posted by Dr Karen Ette at 19:56 1 comment:

If you are looking for somewhere to go for afternoon tea,that goes the extra mile to create food which is delicious and affordable, then look no further.

Click here to find a delightful Derbyshire Tearoom  and Gift Shop combined
Posted by Dr Karen Ette at 21:18 No comments: