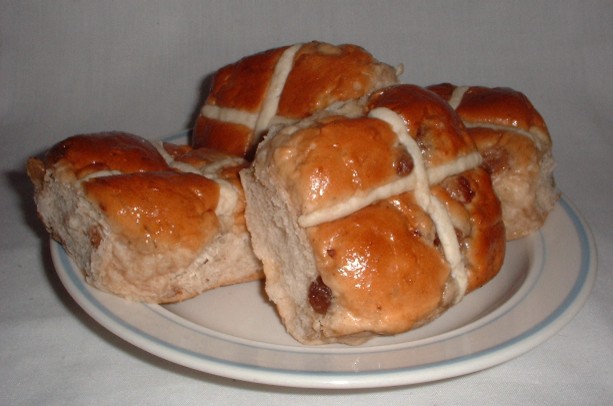 Hot cross buns!
If you have no daughters,
Give them to your sons
One ha' penny,
Two ha' penny,
Hot Cross Buns!

But why Hot Cross Buns on Good Friday?

Buns are traditionally eaten hot or toasted, on Good Friday, and some say that the cross on the top represents the crucifixion. However, although the first recorded use of the term "hot cross bun" was not until 1733, it is believed that buns were eaten in Saxon times in honour of the goddess Eostre (the cross is thought to have symbolised the four quarters of the moon). Eostre is probably the origin of the name Easter, but don't ask me when that was though - we need an historian to tell us.

English folklore includes many superstitions surrounding hot cross buns. One of them says that buns baked and served on Good Friday will not spoil or become mouldy during the next year (ha ha). Sharing a hot cross bun is supposed to ensure friendship throughout the coming year, particularly if "Half for you and half for me, Between us two shall goodwill be" is said at the time. They have been associated with Easter tradition since at least the 1300s, when a monk distributed buns to the poor on Good Friday.  The cross on the top denoted that these were of inferior quality and therefore the ones to give to poor people, apparently.

Red Magazine tested and tasted Hot Cross Buns across the High Street and their findings are that Sainsburys ‘Taste the Difference’ are tops. The Guardian also did their taste test with the same conclusion, so Sainsbury's are tops for the third year running.  I tried Tesco's which sadly were a tad dry.  It all depends really on how much spice you like in a bun, how much fruit, white, brown, etc. so everyone’s choice of a good bun is a moveable feast.  You can, of course, bake your own and adapt the recipe so that your taste-buds are delighted with each bite.  I would recommend Master Baker Paul Hollywood’s recipe.

JOHN DORY is a flat, round fish which can weigh up to 7lbs.  It is yellow/olive green with a silver belly (the French word dorée means gilded) and has spines along its back. The phrase ‘swim like a fish’ doesn’t really come into it as it is a poor swimmer.  It has another name too: St Pierre (or Saint Peter).  The reason for this comes from the dark spot on its flank which is said to be St Peter’s thumbprint.  It is actually there to ward off and confuse predators as it looks like a huge eye.  Rick Stein's recipe for fillets of John Dory with cucumber and Noilly Prat (pronounced prat NOT praaaa) is sublime.

SIMNEL CAKE
In the 17th century, female servants would bake a rich fruit rich cake to take home on their rare visits to their mother's on Mothering Sunday which is always on the fourth Sunday during Lent.

The word Simnel comes from the Latin word Simila which means fine wheaten flour and this was the type of flour which was originally used.four centuries ago.

Simnel cake is a symbolic Easter cake: Eleven marzipan balls or figures are placed around the circular marzipan-coated cake to represent the  remaining disciples (without Judas Iscariot who had betrayed Jesus and hung himself). Some Simnel Cakes will have a larger figure or ball in the centre of the cake to signify Jesus.

My favourite recipe for this delicious cake is Mary Berry's.

Fancy Pans Café wishes everyone a Happy Easter and hopes you enjoy today’s food and recipes.