Photograph by Syd Spence (thanks Syd)

The branch from Jesse

11 A shoot will come up from the stump of Jesse;
from his roots a Branch will bear fruit.
2 The Spirit of the Lord will rest on him –
the Spirit of wisdom and of understanding,
the Spirit of counsel and of might,
the Spirit of the knowledge and fear of the Lord –
Click on the arrow to hear a beautiful Graham Kendrick song
*******************************************************************************************
Tradition says that if you eat a mince pie in someone else’s house it means you’ll have a ‘happy month’.
The first mince pies were called mutton pyes, shrid pyes and, believe it or not, Christmas pyes. The filling back in the 13th/14th centuries was minced meat with suet which had fruits added and spices such as nutmeg, cloves, cinnamon, etc. They were brought back to England by the Crusaders.
During the English Civil War (1642–1651) the Puritans (English Protestants) said that the ‘savoury pie’ was associated with Catholic ‘idolatry’, supposedly, and they didn’t approve. The pies won through and the tradition of eating them at Christmas carried on until Victorian times, but they had become sweeter and changed in shape. They were originally larger and oblong in shape (sometimes called a ‘coffin’) but became smaller and more in the shape of a crib. The spices were thought to be representative of the gifts of the Magi.
Having made your mincemeat, it’s time for mince pies. 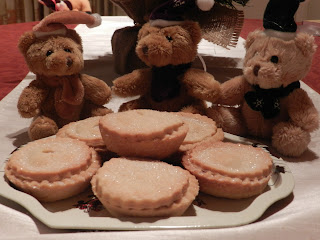 You’ll need a 3-inch (7.5 cm) pastry cutter for the bases and a 2½-inch (6 cm) one for the lids (or you can cut stars like the ones in my photograph), plus a greased patty tin which holds 12, and, of course, a rolling pin. Pre-heat your oven to 400F, 200C, gas 6.
To make 24 pies, weigh 7 oz (200 gm) of plain flour and add 1 oz (25 gm) of icing sugar and a pinch of salt. Sieve it into a bowl to get as much air into it as possible
Then add the fat. I like to use half butta and half lard to give a lovely crisp texture. (You can use hard margarine and/or white fat, but you will lose out on flavour). The fat needs to be at room temperature before adding it to the flour.
Weigh 2 oz (55 gm) of each butta and lard (total 4 oz, 110 gm of fat) and add to the flour with and rub in until it resembles breadcrumbs.
Add 3-4 tablespoons of cold  water and bring the mix together to form a smooth, doughy ball (you may need to add a little more water, but take care not to add too much as the pastry will be tough).
Wrap the pastry in cling-film (or put into a polythene bag) and leave to rest in the fridge for 20-30 minutes. Don’t skimp on this. Whilst it rests, the gluten in the flour will react with the water and the pastry will be more elastic and easier to roll out – and it won’t shrink when you bake it.
Flour your work-surface and rolling pin and take the pastry from the fridge and remove the cling-film. Divide it into two and roll out one half to about ⅛ inch (3mm) thick. Cut the bases with the larger cutter, and put them into the patty tin. Put a teaspoon of your home-made mincemeat into each one and cut the same number of lids using the smaller cutter. Place the lids on top of the mincemeat. You can wet the edges first to help them to seal. Make a small cut (½ cm) in the centre of each lid (unless you have made stars then there is no need). You can brush the pies with beaten egg or milk, and pop them into the warm oven for 20-30 minutes until they are a light golden colour.
I sometimes like to sprinkle them with caster sugar and you should do this as soon as they come out of the oven. If you prefer icing sugar, leave them to cool before dusting them with it. 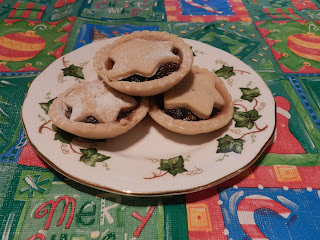