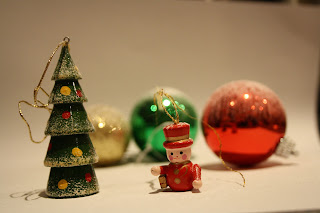 Photograph by Rachael Mott - thanks Rachael 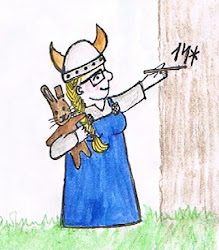 The Velveteen Viking (who knows a lot about drummer boys) and I run creative writing and poetry workshops and one of them resulted in a fabulous charity calendar being produced with local photographs (well, mostly) each accompanied by a poem written by someone in the workshop, that calendar is now available, from Amazon, as a perpetual diary

The photograph above (the one under the date, not Bing and David) heads the December page and here is the poem which accompanies it - written by Alison Mott:


doffing his hat at the Christmas elf,


who stared disdainfully from the shelf,
offended at the cheek of it.
“Looks like snow,” Mr Bungle said,
turning to talk to the fairy instead,
who scowled and tossed her gold-curled head,
too cross to agree the truth of it.
“I love Christmas, don’t you?”
he asked of a robin clipped
to the tree, who
rather wisely
never said a word.

There will be more poems later in the week and just to keep you going and warm the cockles, you might like to try this little recipe called A Heartwarmer:
This powerful punch serves about 12 people, depending on how big your glasses are:
You will need:
200 ml (about 7-8 fluid ounces) red grape juice
8 oz (225 gm) sugar
2 bottles of white wine (I like it to be quite dry)
1 bottle of red wine
350 ml (12 fluid ounces) dark rum

Put the grape juice and sugar into a large saucepan and heat until the sugar has dissolved. Add the rum.  Warm to wine in a separate saucepan (don't boil).
Mix the two together and serve hot.
Fantastic on a cold night.


More recipes and fun facts in the Advent Recipe Book, also available from Amazon, just click here to see them