The Best Billet on The Somme

Bonjour mes amis!  We have travelled across the channel (La Manche) for a spell in France and Belgium.  Still not sure about the Channel Tunnel; a slow boat to Calais is more relaxing and doesn't have tonnes of seawater pressing downwards.  The tunnel also lacks a willing dutch boy to poke his finger into a leaky hole should one appear.  Definitely the Ferry; I'd sooner be on top of millions of gallons of water than underneath it.

When driving to Dover, we discovered it's best not to buy petrol on the Motorway (too expensive) but to wait until just outside the Ferry Port, or, even better, buy it in France as fuel costs much less per litre.  The drive south from Calais to Combles in Picardy took around ninety minutes and on almost empty roads is actually a pleasure.  The Department de la Somme is very flat and in April is a patchwork of colour as the farmers cultivate the chalky land. 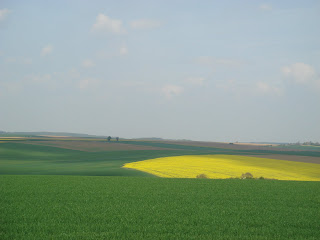 In France, the only way to start the day, has to be with croissants,

This is best experienced at the Best Billet on the Somme which has to be: 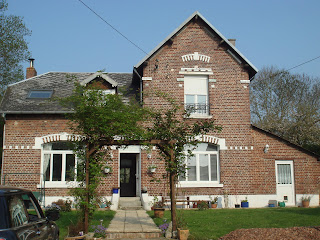 Orchard Farm in Combles, run by Kate and Martin Pegler and their two gorgeous cats.

This small, friendly B&B has one double en-suite bedroom (with a fantastic comfy bed: like sleeping on a marsh-mallow), a twin room and a family room.  There is also a fabulous Gite separate from the main house with its own kitchen, TV, washing machine, and much more.   In addition to first class accommodation and wonderful hospitality, tours of the area are offered, by car or motorcycle.  Orchard Farm is very popular with Bikers.  Martin has written a number of books and is an authority on Militaria, in fact, you may well have seen him on The Antiques Roadshow  from time-to-time.   Martin's collection of guns (including a Vickers Machine Gun) and WW1 memorabilia run throughout the house. 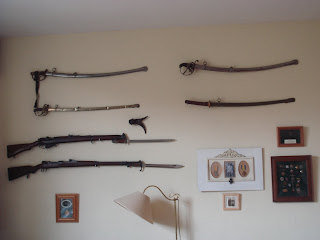 Close by are the towns of Amiens, Arras, Perone, Albert, Bethune, to name but a few and we shall be visiting them all very soon.

The First World War began on 4th August 1914 and raged until At 11 a.m. on  11th November 1918 when a ceasefire came into effect with Germany.  A formal state of war between the two sides persisted for another seven months, until the signing of the Treaty of Versailles on 28th June 1919.  Millions died and the cemeteries and battlefields of France are a physical reminder of this terrible and tragic waste of life.

The village was entered in the early morning of the 26th August, 1916, by units of the 56th (London) Division and of the French Army; and it remained in Allied occupation until the 24th March, 1918, when the place was captured by the German Army after a stubborn stand by the South African Brigade at Marrieres Wood. It was retaken on the 29th August, 1918, by the 18th Division.

THEIR NAME LIVETH FOR EVERMORE

Email ThisBlogThis!Share to TwitterShare to FacebookShare to Pinterest
Labels: France/travel and history