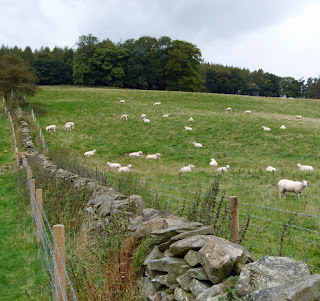 The shepherds play a significant role in the birth narrative of Luke. The shepherds on this particular hill looked after temple sheep, who were bred for sacrifice in the temple.  When the angel appeared and told them of the birth of 'the lamb of God' they were terrified, understandably, but the significance is that the saviour born that day would be the one to pay the ultimate sin-sacrifice so that our sins can be forgiven.


A firm favourite at Fancy Pans, especially at Christmas, is Mutton Pies. The pies are not usually filled with mutton as this needs long, slow cooking first, but does give an extremely good flavour.

The quickest and easiest way to make the pies is to use:
lamb mince, say around 1 lb (500 gm)
1 finely chopped large onion - cook it in lard, dripping or vegetable oil, whichever is your preference.  Don’t let it brown though.  When it is soft, drain off the excess fat and add the mince. Let it cook slowly for about ten minutes.

You also need to make about half-a-pint of thick gravy. Advent 3 showed you how to do this, or rather Delia did. (Or you can use instant granules.) Stir it into the cooked meat and season. You can add chilli if you would like a little extra warmth, or paprika for a gentler touch.

For the pastry use half fat to flour:


Rub the lard into the flour until it resembles breadcrumbs and add a good sprinkling of salt and mustard powder. Add 5-6 tablespoons of cold water until the pastry comes together without being sticky.  Wrap in cling-film and rest in the fridge for 20 minutes to half-an-hour (the pastry, not you). As with the mince pies on day 13, don’t skimp on this because whilst it rests, the gluten in the flour will react with the water and the pastry will be more elastic and easier to roll out – and it won’t shrink when you bake it.
Warm the oven to 400F, 200C, gas 6.


When the pastry is well-chilled take off its cling-film coat and cut in half (it’s easier to work in smaller amounts).  Roll out one half on a floured surface to about ¼ inch thick and use a saucer to cut out circles of the pastry. Put a spoonful of the mince in the centre of each pastry circle, wet round the edge of the circle with cold water and pull the sides up and over the mince and squeeze it together to seal. Put the pies onto a greased baking sheet and pop into the oven for about 20-25 minutes. Do the same with the remaining pastry. 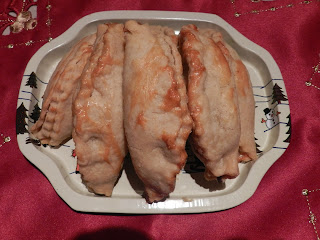 If you would like to see more of our delicious recipes, follow the nativity story and read some interesting Christmas facts then check out our Advent Calendar Recipe Books on Amazon