Spring has sprung (officially) and the clocks are about to leap forward. No longer will we be living on Greenwich mean-time, but British summer-time (until the end of October).

Alfred Lord Tennyson (1809 -1883), from his poem Locksley Hall (a monologue of 97 rhyming couplets telling the tale of an emotional soldier returning to his fictional childhood home) speaks of Spring:-

In the Spring a fuller crimson comes upon the robin's breast;
In the Spring the wanton lapwing gets himself another crest;


So to turn heads towards food instead, I thought it would be good to add a springtime feel (or rather taste) to our menu. We have been creating something new for the breakfast selection and chef had decided on Hugh Fernley Whittingstall’s asparagus, chorizo and poached eggs for a particularly sunny morning. (It doubles up for lunch too.) 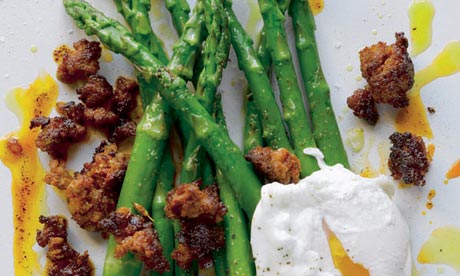 After preparation I noticed quite lot of asparagus was left, mostly thick stalked ones which are a wee bit too woody – but not for soup. Seizing the moment; soup of the day was to be Asparagus and Celery.

I chopped decent sized unyun and sweated it in butta with some chopped bakun. As I was chopping the asparagus pieces (and I think there were about a dozen) a regular visitor helpfully said: “you do know that if you eat asparagus it makes your wee smell?”  Well, thank you for that! Anyway, it’s the young, tender spikes which have that effect, apparently. In fact, there’s quite a debate about it so I’m not sure if it affects everyone in that way or just the selected. Or, it could just be that only some can actually smell it and others can’t. All to do with the olfactory system I guess. If you click on the link above, good old Wikipedia will tell you all about it.

Moving on, I added celery to the unyun and bakun, after stripping off the stringy bits. You can just chop it, but then you need to put it through a sieve to get rid of them and the soup loses its consistency. Or, better still, use celeriac. I used about half a dozen sticks of celery so that would be about half a celeriac root. It needs about two pints of stock, chicken is best, unless you are veggie of course, and then you wouldn’t have put the bacon in either. Vegetable stock is equally good. Finally, with the asparagus I added four potatoes (after I had peeled and chopped them) and left it to burble for about twenty minutes. I used a mixture of herbs as I couldn’t decide which would be best (thyme, marjoram, sage, oregano, parsley). I also used white pepper although you could use ground black pepper if you prefer.  It’s all a matter of taste.

To go with this spring soup, a really good bread was required. Paul Hollywood was the obvious choice and he does fabulous Roquefort and walnut bread rolls. Just perfect.


When the soup is cooked I use my ‘magic wand’ (hand blender) and joooosh – ready to serve. It's really good with a dollop of creme fraiche in the centre.

I have given some to our regular caller and they will report back about the after effects. (I noticed they had also eaten the poached-egg breakfast, so they should find out for sure!) Apparently asparagus is a diuretic, so results shouldn't take long. On the bright side, asparagus does have some excellent health benefits; it has been said that it can:

detoxify our system
have anti-aging functions
protect against cancer
reduce pain and inflammation
prevent osteoporosis and osteoarthritis
reduce the risk of heart disease
help prevent birth defects
and
is considered an aphrodisiac - oh dear, we're back to young man's fancy!

Soup:
Medium onion
Chunk of butter (about 2 oz)
2 rashers of bacon – chopped
About a dozen spears of asparagus – chopped
6 sticks of celery – de-stringed and chopped (or half a celeriac)
4 medium potatoes – peeled and chopped
2 pints stock
Mixed herbs.
Salt and white pepper (or black – your choice)

(follow this link for quantities and recipe)
Posted by Dr Karen Ette at 18:47