"It's a funny old game" is often said of football [soccer] but cricket has many people stumped.

2018 has had a gloriously hot and sunny summer with few matches being rained off.  There's nothing better than spending a day at a County Ground. All you do is: sit, eat lots, drink lots, especially tea, and watch the game, hoping your team will win. 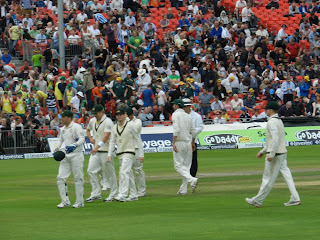 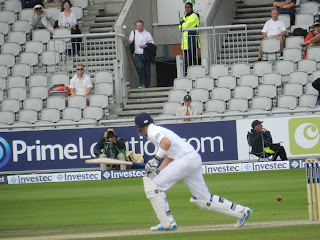 Understanding the rules, regulations and scoring can be mind-boggling, but it's quite simple.

“To stay in, you’ve got to not get out,” said Geoff Boycott.

Another explanation of the rules is that:

You have two sides, one out in the field and one in.
Each man that's in the side that's in goes out, and when he's out he comes in,
and the next man goes in until he's out.

When they are all out, the side that's out comes in, and the side that's been in goes out, and tries to get out those coming in.
Sometimes you get men still in and not out.
When both sides have been in and out, (sometimes twice), including the not outs, the winner is declared.....if there is one! 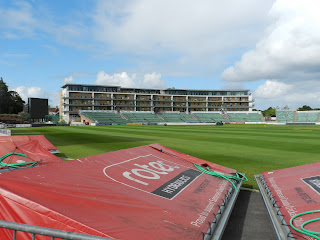 The County Ground, Somerset, which has the famous Sir Ian Botham stand