The rain had stopped and the sun was trying to put in an appearance too as we took our seats on the lawns of Thorsby Hall, near Ollerton in Nottinghamshire and awaited the performance of Macbeth by the Oddsocks Theatre Company. 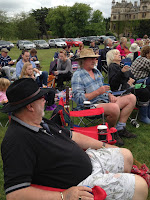 The Oddsocks Theatre Company say that: ‘The Oddsocks approach is holistic, transcending from cast and crew through to local, regional and national audiences. No hierarchy and no elitism; just a creative group united by the aim to engage as many people as possible in exploring the potential of theatre and the stories it tells. Breaking down the barriers between communities and culture.’

Their adaptation of Macbeth was funny, hilarious at times, entertaining and had a musical theme where the cast could not only show off their acting skills but their musical talents also.

This was Shakespeare – Steampunk style. 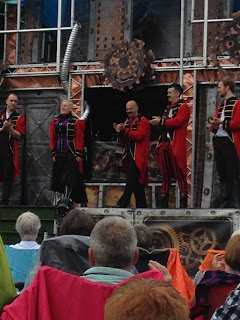 Macbeth is a story of murderous ambition with supernatural intervention. 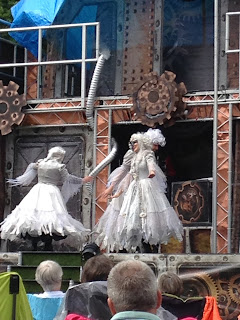 Lady Macbeth receives news from her husband of the prophecy and his new title and she vows to help him become king by any means she can. Macbeth returns as Duncan arrives. The Macbeths plot together and later that night, while all are sleeping and after his wife has given the guards drugged wine, Macbeth kills the King and Lady Macbeth leaves the bloody daggers beside the dead Duncan. Macduff then arrives and Duncan’s sons are blamed for the murder. 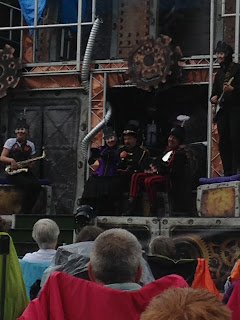 Macbeth, now King of Scotland, arranges for Banquo be killed, then at a banquet Macbeth sees the ghost of Banquo, which troubles him and he begins to act strangely.

Lady Macbeth tries to calm him but doesn’t succeed.

The witches tell Macbeth that he will be safe until Birnam Wood comes to his castle, and that he need fear no-one born of woman, but that Banquo’s son will be King.

Angered by this, Macbeth launches into murderous actions and many people are killed, including Macduff’s family. Macduff, however, has joined Duncan’s son, Malcolm, at the court of King Edward in England. Malcolm and Macduff decide to lead an uprising against Macbeth.

Back at Dunsinane Castle, Macbeth feels safe until he is told that Birnam Wood is moving towards him (cue audience to wave arms in the air) – Malcolm’s army is carrying branches to camouflage them.

Lady Macbeth is wracked with guild and commits suicide.

Macduff challenges Macbeth, who discovers that Macduff was born by caesarian section.

Macbeth riding a motorbike and singing Bat out of Hell, was brilliant. Macbeth realises he is finished and Macduff kills him. Malcolm declares peace and is crowned king.