When rhubarb it at its finest, the sun is usually shining then garden and culinary skills can be put to excellent use. 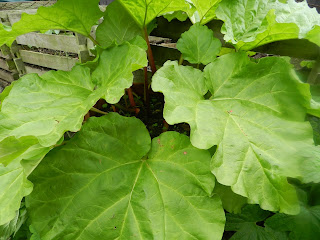 I remember, as a child, being given a rhubarb stalk and a small bag containing sugar – the original sherbet dip! Boy did it make your eyes water and jaws tingle.

Rhubarb is grown for its stalks, which, incidentally, are called petioles, from the Latin petioles meaning “little foot” which evolves into pediculus meaning “foot stalk”. It has been around for thousands of years in China and became more popular in England in the 17th century after sugar was more readily available (and you definitely need sugar with rhubarb) although the earliest entry in the Oxford English Dictoinary is:

And  a gem from the 17th century; the entry reads more easily:

?1760   H. Glasse, Confectioner:   To make rhubarb tarts. Take stalks of English rhubarb..peel and cut it the size of goosberries; sweeten it, and make them as you do goosberry tarts. 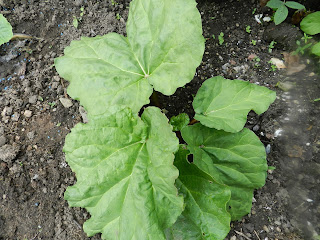 If you grow your own or are fortunate to know someone who does, always remember to cut the leaves off and discard them as they contain oxalic acid, which is poisonous.

Be warned - if you eat too much (stalks, that is) you may think you have been poisoned as its reputation as a culinary laxative is well known! 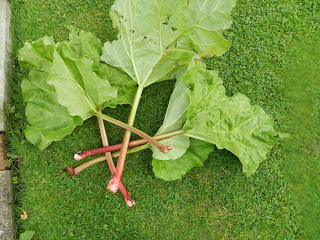 How wonderful that this modest plant is often spoken about on the stage - when lines are forgotten or a hubble of mutterings is called for, then the stock phrase is, of course: rhubarb, rhubarb, rhubarb.

Now you know all about this fascinating plant, if you go to the recipe pages, you will find some delicious ways to use it. Just click on the links below:

Rhubarb Crumble
Rhubarb and Ginger Yogabub (like a syllabub, but healthier and less calorific)
Rhubarb and Strawberry Jam
Posted by Dr Karen Ette at 18:19