2 Ramero Peppers
1lb tomato flesh (about 500gm)
1 large onion
1 or 2 carrots
2 rashers of lean un-smoked bacon
1 or 2 red chillies - depending on how 'hot' you like your soup
1 clove of garlic
1 pint of stock * if you use a stock cube, make sure it's gluten free *
Salt
Black pepper

So, there I was, bumbling round the supermarket, muttering under my breath that I hate supermarket shopping – a necessary irritation in the flow of an otherwise enjoyable morning – when I spotted a treasure chest of superb ingredients for a Soup of the Day at Fancy Pans. Piled up in an area given the delightful name of Vegetable Dump was an abundance of juicy, red peppers. I scooped up most of them, leaving a few for other lucky shoppers and then noticed a juddering trolly approaching the Vegetable Dump which was being pushed by a member of the supermarket staff called 'Here to Help'. There was a small mountain of very ripe vine tomatoes threatening to tumble floor wards from the post-date load of fruit and veg. I nodded towards the tomatoes, he shrugged and I transferred them from one wobbly trolley to another – mine.

Snatching up some buy-one-get-one-free bacon bargains, I headed towards the checkout with my collection of red, out of date, fruit.

To make the soup, I tipped the red fruits into the sink and washed them thoroughly. For one batch of soup I took two large red peppers and two of the Ramero type and took the hard stalk and core out making sure I scraped all the seeds from the flesh. When the peppers were sliced in half I popped them into the oven to roast. I then took a couple of pounds of the tomatoes and put them into a bowl.  I first poured boiling water over the tomatoes and then ran cold water over them so that I could easily skin them and take the pips out. Having done that, I weighed them and there was a pound of flesh – Shylock would have been proud. I did think that had I not been able to find such lovely tomatoes, a 500gm can of chopped would have been equally as good, and saved on time.

I checked on the peppers – they were roasting nicely.

I rummaged in the veg store and found a red chilli.

I didn’t want to touch this really as it’s so painful when you rub your eyes after chopping one of these red-devils. I pulled on a pair of disposable gloves, the kind you see paramedics wearing, to perform this operation and kept them on to chop a large onion too – it’s so hard to get rid of the smell of onion once infused into your skin. Likewise with a clove of garlic which I crushed. Whilst in chopping mode, I diced a carrot and then chopped up a couple of rashers of bacon. Into a large, saucepan I poured some vegetable oil and turned on the heat. I then threw in the onion, carrot, bacon and garlic and left them to cook for a few minutes. When the peppers were roasted I was easily able to peel off the skin. I suppose I could have just chopped them up without roasting them, but I would have had to put the end product through a sieve to make sure there were no residue nasty bits. The onion and carrots were soft so I added the peppers, tomatoes and chilli and gave it a good stir. From the fridge I took about a pint of vegetable stock, we are out of chicken stock at the moment, but that would have worked too. If you do try this recipe, you can always use a stock cube and boiling water if you don’t keep stock in the fridge (who does?) If you do use a stock cube, make sure it's gluten free if you are making a gluten-free soup.

After about twenty/twenty-five minutes everything was cooked and I took the hand blender and jooshed the soup. It did need a little more salt and I also added some freshly milled black pepper.

I love this with fresh Ciabatta – just gorgeous. Master baker Paul Hollywood will guide through it if you would like to make your own, but it is tricky so you may need to buy some it you need it sooner rather than later. 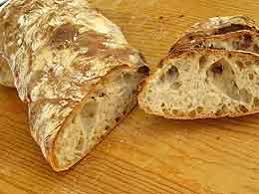