Apparently, shortbread is the traditional bridal cake in Scotland and it's one of the easiest and most satisfying sweets you can make. It only has three ingredients so what are you waiting for?

Get a large bowl and sieve 9 oz of plain flour into it. Add 3 oz of caster sugar and mix well.  Then add 6oz of best butter, rub it in and knead into a smooth paste. Divide into two pieces and press each one into a 7 inch tin.  It should be about half and inch thick (that's just over a centimetre).

When you remove the shortbread from the oven, mark it into portions whilst it's still soft and you can prick it with a fork too. Sprinkle with caster sugar and leave to cool.


﻿
Enjoy your delicious shortbread with a nice cup of tea whilst you read all about Saint Andrew: 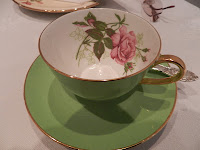 
Around the middle of the tenth century,  Andrew became the patron saint of Scotland and has his feast day on 30th November.

As Scotland developed as a nation, it needed a national symbol. The early Picts and Scots modelled themselves on Saint Andrew and so this was the country's choice.

Andrew was the brother of Simon Peter, by which it is inferred that he was likewise a son of Jonah, or John.[Mt. 16:17] [Jn. 1:42]  He was born in Bethsaida on the Sea of Galilee.[Jn. 1:44] Both he and his brother Peter were fishermen by trade, hence the tradition that Jesus called them to be his disciples by saying that he will make them "fishers of men".  At the beginning of Jesus' public life, they were said to have occupied the same house at Capernaum.[Mk. 1:21-29]
John's Gospel states that Andrew was a disciple of John the Baptist, whose testimony first led him and John the Evangelist to follow Jesus.[Jn. 1:35-40]  Andrew at once recognised Jesus as the  Messiah, and hurried to introduce him to his brother.[Jn. 1:41]  From then on the two brothers were disciples of Christ. On a subsequent occasion, prior to the final call to the Apostolate, they were called to a closer companionship, and then they left all things to follow Jesus.
Andrew is said to have been martyred by crucifixion at the city of Patras (Patræ) in Achaea which is on the northern coast of the Peloponnese. Early texts, such as the Acts of Andrew, describe him as being bound, not nailed, to a Latin cross of the kind on which Jesus is said to have been crucified; yet a tradition developed that Andrew had been crucified on a cross of the form called Crux decussata ( an X-shaped cross, or "saltire"), now commonly known as a Saint Andrew's Cross — supposedly at his own request, as he deemed himself unworthy to be crucified on the same type of cross as Jesus had been.


The flag of Scotland, and consequently the Union Flag and the arms and flag of Nova Scotia, feature St. Andrew's saltire cross.

St. Andrew’s Day:  30th November
Let's all have a wee dram and raise a glass to St Andrew

For a fabulous Advent Calendar packed with facts and recipes, please click here
Posted by Dr Karen Ette at 08:24